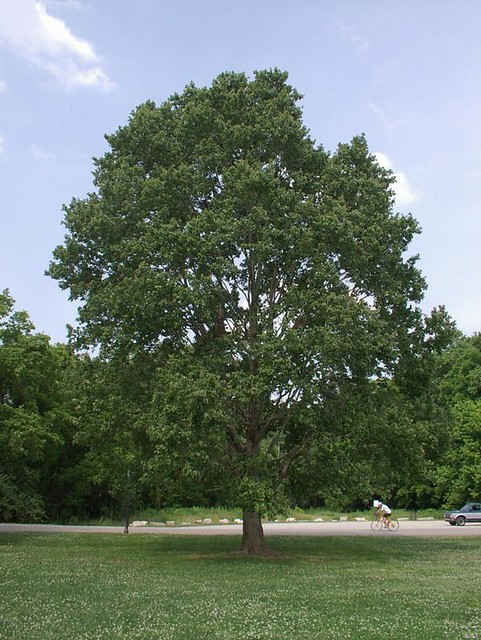 Today I chose to climb a tree that I have climbed many times before.I drove into Cherokee Park and was coming up to Frisbee Field where during high school and summers between college my friends and I played ultimate countless times.There is this tree that was like home base.We laid all our stuff around it and escaped the hot sun under its leaves.I often climbed in it during breaks.That spot holds a lot of special memories for me.

So just before I climbed I had the sudden urge to go to the bathroom, pretty urgently. I debated leaving but, frustrated and determined, I decided to climb first and do it quickly, kind of as a speed climbing challenge. So I jumped into the tree and raced up its many strong branches. This tree’s structure is spread very wide with a few different main branches to pick. This made the view from my highest point amazing. I looked down and it was open, no leaves in the interior, but thick out on the edges creating an enclosed globe almost. The long grey branches just spread out and up below me and I could imagine many different places to climb around. In my effort and excitement, my previous urge had left me. My climb, in totality, resembled a cursive, under case “u.” Up one side, on one branch, back down then up and down a different branch. This climb was really fun, free, and filled with great memories. And all the while, even as people played in the park and kids rode their bikes underneath me, I retained a peaceful, hidden seclusion.

5-30-08:  For those who somehow may not know what ultimate is, it is a frisbee game.  Similar to football but with no tackling, and if you have the disc you can’t run.  Two teams, two end zones… a very easy game to grasp which makes pick-up games in the park so great.  I remember organizing games with friends, and then after playing a while, strangers would ask to play and the teams would grow.  I first heard of the game when I was spending the night at Will’s with Jonathan Bronner.  We decided we would start playing.  That day Will and I also stumbled onto another thing that forever changed who we are:  Dragonball Z.

That was a big day for us.  I believe that was in the summer after freshmen year of high school.  “You’re only 15 in the summer once.”  Will’s mom, Joyce, told us that one day that summer.  It is so simple, so true, I still think about it every summer, only i adjust my age.  It’s a great carpe diem kind of a thought.  You’ve got one life… live it.  And on another topic that has suddenly popped into my head… but is related are dances.  School dances.  I listened to This American Life last week and it was about prom.  So many people think they are lame, don’t go, have a bad time, etc.  I went to every dance there was because I had this attitude about experiencing things.  Why would I miss out?  Just go, do stuff, have no expectations and, you never know, it could be great.  It could also be bad, which a couple have been, but really, I learned from it and ended up valuing that experience.  You can never go back and redo things.  You may have regrets, but you’ll have a lot less if you just say “yes” to all invitations.

And to my climb yesterday….  I worked with Norman again yesterday.  We layed some serious floor.  Then we went over to a house his cousin, Gus, was house sitting for.  There was a fire pit, and food and beer.  It was a good time.  Before it got dark, as the sun was setting, I climbed a tulip poplar just 20 feet from the fire.  Gus filmed me.  Here it is in full, enjoy: