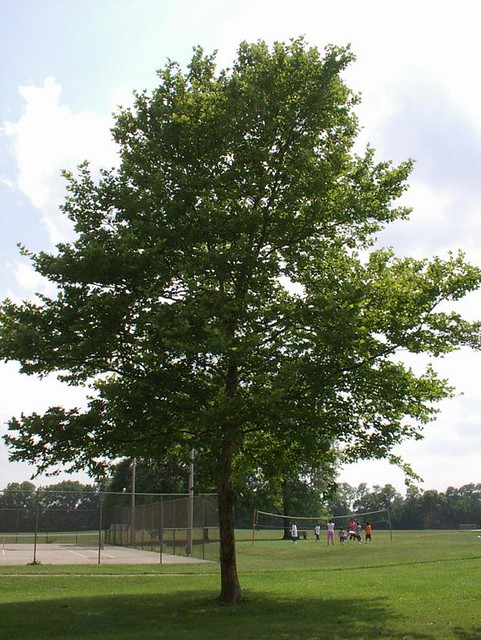 A busy and eventful day. I planned on heading to a bar-b-q around noon but discovered my truck wouldn’t start. After jumping, checking things that I have no idea about and then waiting for Norman, we popped the clutch and got it running. So I headed to Prospect and met my dad at a garage. Then he drove me to my parents’ house for some lunch. Once lunch was done the truck had gotten a new battery and was ready to go so dad dropped me off and I headed to Hays Kennedy Park. I chose another camo-bark tree near the parking lot and tennis court that sat all by itself. First thing I noticed was a huge cicada in thebranch. I looked down and noticed one, then two, then 3 shells. Excited I set them on the ground to take them. The lowest limbs had all been cut recently but I was determined to climb this one. No branches overhanging so I had to run up and grab the spots where limbs had been. It took five or six tries but I finally stuck and hopped up. Once in the limbs it was routine up and up with great holds and sturdy branches. A beautiful day, I really rested at the top and looked around enjoying the view. Going down was fun and the jump roll to the ground was a thrill ’cause I went from pretty high. I collected my molts and found a few more. That night at my opening for DIG! I wore four of the little guys on my shirt. Good show, good day, good climb.

6-30-08:  That was an awesome day.  My first real show ever.  I named my installation Emergence and it had a price and everything.  Here is a picture:

The idea was that these creatures crawled out of the dirt, crawled up the wall and then shed their skins.  If you look closely at the dirt, there are exit holes from the creatures emergence.  I also thought it was a good title for an emerging artist.  Plus lots of friends showed up, there was a lot of support and I appreciated it very much.  And I really liked the reaction to the cicada shells on my shirt.  It was either, “awesome! very fitting,” or “GROSS! get away from me!”  That night after some celebrations I slept on Maryliz’s deck.  Just a good memory… the whole day.

So all day yesterday I worked on a grant proposal.  I isolated myself in my apartment and just wrote, revised, looked at images, updated my resume… etc.  Drew and Maryliz stopped by and read through it.  They really helped me on this one.  Drew and I also discussed the basis for the idea of the project on the drive back from Michigan on Saturday.  I really appreciate your help, Drew.  Then in the evening I took a break and drove to Cherokee Park to climb a tree.  I parked at Dog Hill and walked to this large Poplar I have been eying for quite some time.  It had only one option for entry and that was this overhanging limb.  It seemed very strong but after just a little weight, the branch snapped right off.  My legs had not even left the ground.  I shamefully dropped the limb and walked away.

I headed towards Hogan’s Fountain and took a side trail into the woods.  I found a nice, tall maple that called to me.  My first attempt shimmying up the trunk failed as I got attacked by a daddy long legs.  Ok, not attacked, but I got… uncomfortable.  So I regrouped, made a plan of action and went back up.  It went fast and smooth, no problems, though I did kill one of those suckers.  Then I climbed up the sturdy limbs until the trunk split into a bunch of branches.  There were 3 main crooks to put my feet and it was quite cozy.  The wind gusted periodically causing some nice sway.  I dropped some whiligigs a while and then took a seat.  I knew when I climbed down I was just going to go back to work, so I really took my time up there to enjoy this great spot.  I thought, “I love this seat, I am going to return here.”  I think that for a hand full of trees but have yet to do so.  In due time, in due time.  Pictures and video to aide in your viewing:

This is what I was looking up at: