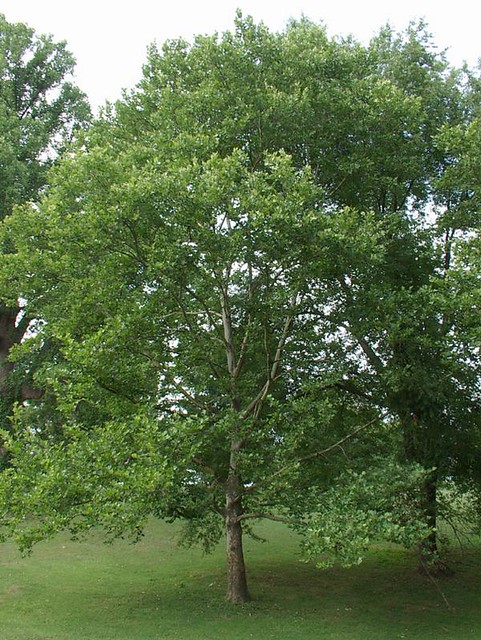 I headed to Cherokee Park with a certain tree in mind. I had seen it before driving through many times but there were always too many cars to park close. But today I had my choice. Before I climbed I attached my camera to my new bendy tripod and attached that to my belt right over the buckle. I faced the lens towards my head and got the video started. At the trunk I realized I couldn’t reach the branches and I didn’t want to run or jump with the camera so I quickly scanned for my options. Immediately my eyes followed a branch out and sure enough I could reach it about 8-10 feet out from the trunk. I went over, grabbed hold and went hand over hand. Once in the tree it was quick climbing with many strong limbs close together on another camo-bark tree. I felt a little preoccupied with the state of the camera as it continued to fall forward and its view covered by my shirt. So once I got to a decent height I shut it off and put it in my pocket. I tied my tag, looked around and then transferred to another main branch to get a better look at a possible tree transfer. Once closer I thought the transfer possible, but highly dangerous, risky, and insane. So I passed and climbed down, jumping and swinging down with confidence. In trees like these going down fast is a blast. A fun climb and interesting video.

6-29-08:  “…going down fast is a blast!”  Woohoo!  I debated posting this video because it was my first one.  I set the video quality low so as to not take up a lot of space on my memory card.  The result was an awful looking video where you can barely discern what is what.  But I was just trying stuff out.  Specifically my cool ass tripod:

It has come in handy quite a bit.  Though my camera is a bit heavy for it and tends to slowly tip over sometimes.  This is my camera:

It is interesting to me that I have not only climbed a tree everyday, but I have taken at least one picture everyday, and written or typed everyday for well over a year.  I am lucky that camera is still working.  If that thing ever breaks I’ll be devastated.  That is, until I buy and new camera which will be far superior and I’ll be thankful it broke.  (It only takes 4 megapixels, but decent video and lots of cool features.)

Yesterday I drove over to Kammerer Middle School after leaving the McChesney’s.  I went to this middle school and have yet to check out its trees.  There are not too many but I found a good one in the back corner by Ballard High School’s baseball field.  I decided I would set my camera up on the ground to take a video of my climb.  It looks pretty cool at the beginning and at the end, but in the middle I kind of disappear for a while.  Sorry, stick with it and I’ll come back.  There were just too many leaves in the way and I think I climbed so high I was out of view anyway.